AUTHENTIC VISUAL VOICES™:  Contemporary Paper and Encaustic is a book that Catherine Nash has been curating and writing for two years.  Traveling across the United States, she has conducted videotaped interviews in the studios of 28 international artists.  Media was used only as a parameter for narrowing the field.  While the reasons for choosing particular media is discussed, the book's true focus is about where artists' inspiration comes from and how they find their ideas.  The interviews are edited and being compiled along with rich portfolio pages of each of the interviewees.  Also included will be a gallery of international artists represented by one work each.


Here is a peak at what I've been writing...


The home and studio of artist Russell Thurston is in the piñon and juniper studded hills in southeastern Santa Fe, New Mexico.  Through his studio windows, one can see out into the Rio Grande valley to the south. These vast scenic stretches are fodder for Thurston’s creative ideas.  He is quick to explain that he is not trying to depict nature realistically, but seeks to imbue his artworks with the expansive and intuitive connections he experiences while out in the surrounding wilderness. Thurston celebrates the mystery and wonder of growth in works such as Midnight Bloom and Tiger Eye.  These paintings’ use of pattern, repetitive forms and rich color speak to the beauty of the interior of flowers with their petals, pistils and stamen. They are seductively instilled with an enigmatic atmosphere that incites a meditative state of mind.

Russell’s love of nature lives side by side with a deep appreciation of science and a thirst for “understanding the whys and hows of things”.  In his art he contrasts, or rather, integrates nature and technology by juxtaposing organic and inorganic forms. For instance, in Down to the Well, an intricate system of pipes and machinery dependently pull energy from an imaginary field and sky.  The atmospheric landscape is painterly and organic, filled with shapes that speak to cells or microscopic organisms.  In contrast, the machine-like labyrinth of technological ducts and piping is hard edged and mechanical.  The machine is created of finely cut tissue paper that has been painted in gradations of encaustic paint and burnished down into the surface.

Thurston’s art offers us a way to contemplate the subtleties of the intersection between scientific systems, technology and nature in our modern world.  Our understanding of the interconnectedness of the environment and humanity continues to evolve not only through the insights of scientists, environmentalists and writers but also through visionary contemporary artists such as Russell Thurston. 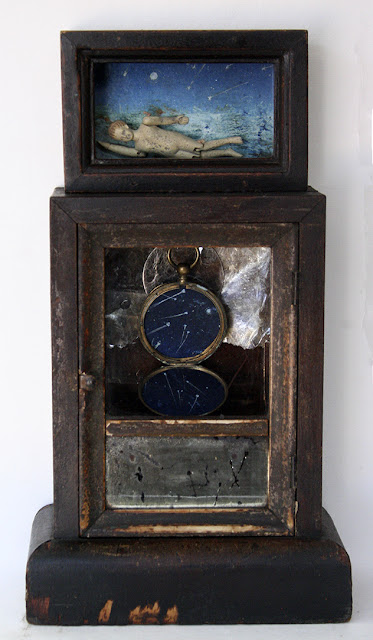